What does “redundancy” really mean? How much redundancy does a web host really need

Anyone who has spent time with little kids dreads the inevitable “But why?” question. When
children are about 3 or so, they go through a phase where the answer to any question is “Why?”

“Because you need your sleep.”

“Because you haveto sleep to be healthy and to grow big.”

“Because the cells in your body need to … hang on, why am I debating this with a 3-year old? I’m your mother and I say go to bed!”

For most web sites that are just starting out, they are housed on a single computer. (Probably
with a bunch of other web sites, as well.)

Those computers have several potential points of failure: hard disks, power supplies, network connections, viruses, poorly maintained software, etc. So there needs to be a stock of parts to replace hardware that fails, and there need to be technicians on hand to install the hardware and fix software problems.

But if the hard drive or power supply fails, the entire computer (and all the web sites on it) disappears from the internet until the new hardware can be installed and configured.

So you build in redundant systems.

For example, you can have a second hard disk in the machine that is “mirroring” the primary hard disk. Everything that happens on the primary hard disk is immediately copied on the mirror disk. So in the event of a hard disk failure, the computer automatically switches to the backup drive and a technician is notified of the hardware failure.

Total downtime for the web site? Less than a second.

If you were a particularly precocious 3-year old you might then ask, “But what if the power
supply fails so BOTH hard drives lose power?”

“In that case,” you answer patiently, “we have a second computer that is mirroring the first one. If something major fails in the first computer, then traffic is automatically routed to the second one, and the first one is taken offline. A tech is notified of the failure, and they fix the broken computer.”

“OK,” says the 3-year old, “what happens if a car crashes into a telephone pole, knocks the
lines down, and your whole building loses power?”

You can see where the kid is going with this, and you know you aren’t going to get out of it (bed
time is a long way off) but you are prepared. After all, Seattle has severe windstorms, semi-regular flooding, and even earthquakes that all can affect the City’s ability to deliver power.

That’s why there is a wall of backup batteries at Wowrack. Literally. An entire wall. 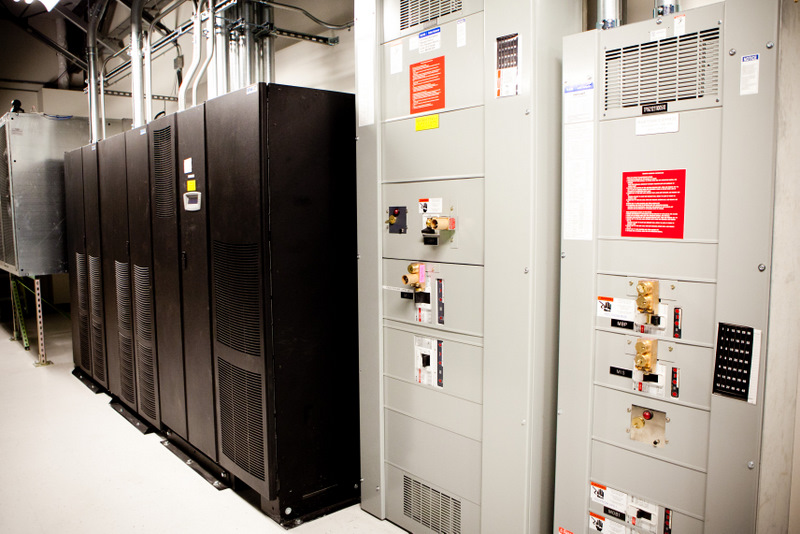 But batteries only buy you a little bit of time, in which you can bridge brief power outages,
brownouts, or other power problems. You get a few minutes to assess the scope of the problem and decide whether to shut everything down or…

… go outside and fire up Wowrack’s HUGE diesel generator!

A small car accident or tree branch falling on a power line is no reason for your web site to drop off the internet. That’s why Wowrack has a diesel generator outside that can run the facility – all the servers, all the cooling systems, all the battery backups – for as long as there is fuel available for the generator.

So Wowrack has power covered. But staying on the internet is more than just keeping the lights on and the servers running. There still has to be a cable connecting you to the
internet.

Can You Hear Me Now?

Fortunately the Seattle metropolitan area has a lot of big fat data pipes coming from all over
the world. There are two in particular that Wowrack uses, one due north of us a little more than 10 miles away, and another due south of us about 8 miles away in a different city entirely. That means we are protected from construction crews digging in the ground, citywide power outages or natural disasters, and other similar problems. If one of our data pipes goes down due to almost any conceivable disaster, it’s a pretty sure thing that the other will be up and
running and unaffected.

And that means your web site will remain running, despite almost any environmental chaos
surrounding our building.

“But what if an airplane crashes into your building?!?” the little one cries.

Every business owner makes their own decisions about the level of security, redundancy, and
disaster preparedness that is reasonable for their business, their city, their country, and the list of possible things that can go wrong.

Here at Wowrack we have more than 10 years of experience keeping our customers web sites up and available on the internet. While nobody can easily achieve 100% uptime, the few
outages we experienced led us immediately to improved systems inside our company.

No matter where your customers are in the world, or when they access your web site, we have
taken every reasonable measure we can to ensure that your site is alive and well on the internet 24×7. No matter what is happening in Seattle that day!