Hosting Server Infrastructure In Your Office vs. The Data Center - Wowrack Blog

Hosting Server Infrastructure In Your Office vs. The Data Center

Having your servers hosted at your office has the least resistance from an organization’s management team.  It’s close to you, you can troubleshoot right from your office, and uses spaces that you’re paying for anyway.  However, there are several risk factors involved with hosting your own server infrastructure, from security, redundancies and the immediate need of getting an issue resolved at 3 AM.

Data centers are designed to be up 24/7/365 in all aspects – from network, power and in the case of Wowrack, being staffed 24/7/365 in all respects (data center staff, network engineers, system engineers etc.) to help customers when facing critical issues with their environments.  Usually, your typical office server room or closet is not built with these features in mind.

Concerns every IT Manager should have with their server environments:

When hosting your infrastructure, you must acknowledge and be mindful of the security risks associated with it.  These risks include theft, fires, water damage, employee accidents and more.

At Wowrack, security is built in with every aspect of our operations starting with the moment you enter the facility.  We require two-factor authentication – keycard and a biometric signature to gain access to the facility.   Additionally each cloud environment or colocation cabinet in the data center can be fitted for additional security using an encrypted key to gain access, perfect for any compliancy requirements you must adhere to.

The facility also features dry-pipe pre-action fire suppression with VESDA, which samples the air continuously to provide the earliest possible warning of an impending fire hazard.

24/7/365 Monitoring of Facility with Archiving

Wowrack monitors every aspect of its facility from our 24/7/365 on-site Network Operations Center (NOC).  Additionally, we have nearly a combined 200 cameras throughout our Seattle facility that is archived and backed up offsite.

Wowrack’s network is a fully meshed network with multiple ISP’s, resulting in no single point of failures.

What happens when construction is going on and some contractor cuts fiber that supports the network connection powering your infrastructure?  This could be less worrisome if your gear is mostly internal facing, but for how long could you sustain a network outage for?  What happens when your core router goes down?  Do you have a meshed network in place to counter this?

Wowrack has multiple network carriers, which enter the building from diverse paths from one another.  By having multiple carriers, we avoid having a single point of failure in the event a provider goes down.  Additionally, by having diverse paths, a fiber cut can be sustained while still being operational via one of our other carriers.  Moreover, we have a fully meshed network to mitigate the loss of a single core or distribution router. 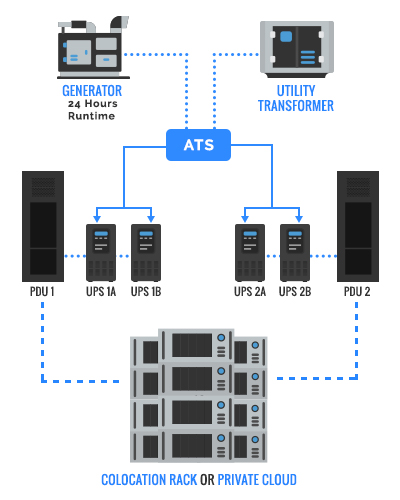 A greater threat than a network failure are power outages.  These disruptive events could corrupt data if you do not have UPS (uninterruptible power supplies) and generator standing by, in addition to fueling contracts for extended outages.  This could translate to loss of revenue, productivity and perhaps even an increase in expenses should the situation become dire enough.

Wowrack not only has UPS systems, but we can support up to 2N of power, overkill for most needs.  In lamen terms, this allows us to lose multiple UPS systems and still be able to deliver UPS power protection, should you have A/B power.  Moreover, our overall presence is backed by two generators with 24 hours of fuel on-site in addition to fueling contracts in place for extended periods of utility failure.

Our power infrastructure is tested multiple times each week in addition to quarterly inspects by third parties with a live annual confidence test, which has been successful each year since inception.

Cloud computing environments, and servers in general, give their peak performance when their environments are optimal – that includes consistent cool air that is dust free with low humidity.  When the environment is not ideal, your equipment can have a shorter lifespan or if the situation is severe enough, your servers can literally shut themselves down or begin to auto-throttle themselves to slower speeds as a way of cooling themselves down.

Wowrack’s entire cooling plants are redundant in every way – from our closed loop chiller system to having our CRAH units in an N+1 configuration.  This ensures continuous filtered cool air at all times even in the event of a failure of a unit. We take this a step further by taking advantage of the cooler months by pulling outside air into the facility that is twice filtered.

Wowrack’s CRAH units are setup in a N+1 configuration. During the cooler months, we pull in air from the outside.

Transition to a professional data center such as Wowrack can be done in many ways.  The easiest service is our colocation service, which allows you to bring in your own equipment and host it in our secure facility.  We can also help with converting your infrastructure to a private cloud environment that is hosted and managed by Wowrack.

Get in contact with the experts at Wowrack today for your no-obligation consultation!